I recently conducted a book club using Dr. Alan Watkins book Coherence. The most useful tool in the book is the idea of the emotional roller-coaster related to change in an organization.

The basic idea is that for every change in a company (and we all have no shortage of those) the individuals that make up the company must pass through a spectrum of emotions that looks like this: 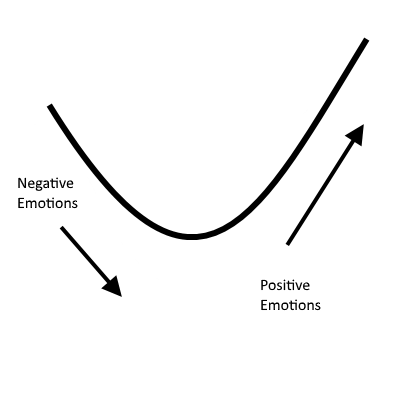 Yes, every time, with every change.

The picture in the book is better, but I don't have permission to reproduce it so I've Cliff-Noted it for you.

We've all seen this before. When confronted with change, people resist. This turns out to be normal (and required) human behavior to process this change.

The key insight for leaders? You can't force people to move forward on the roller-coaster. You can appreciate where people are, acknowledge it, and help them move toward the future.

This was a very helpful insight for me. I know that several times over the course of my career I have tried to force people to where I was on the roller-coaster. I remember one series of meetings in particular where a group of unsuspecting people were essentially expected to attend a 30 minute meeting and arrive on the right hand side, without any time to process at all.

I've also questioned why they couldn't instantaneously reach acceptance (at the tail-end of the upswing on the right). They can't because none of us can. Though time and the right kinds of experience can help you move faster.

But something has occurred to me after all this. The roller-coaster image is very helpful in order to grasp the initial idea, but it misses something important. As a leader, you need to help people with the left side so that you can gain their help on the right.

In real life the down part of a roller-coaster is the fun part. It's the pay-off for have ridden up to the top. So, with organizational change: you work through the hard part on the left to get the help you need on the right-hand side.

So initially I wondered if something like this wouldn't be more useful: 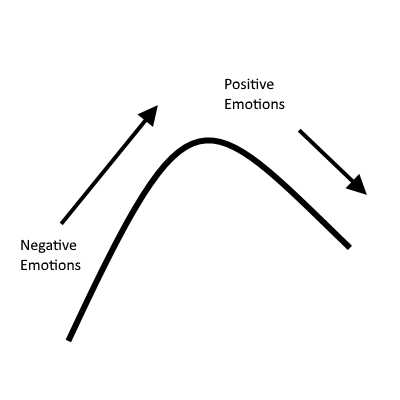 This is nice in that it matches how you actually feel on a roller-coaster. Trepidation going up, thrilled going down.

But it doesn't work at all and here's why. It flies in the face of the up=good, down=bad metaphor that is deeply written into the brain of every human on earth.

Even looking at it and seeing negative emotions going up sort of gives me the heebie-jeebies.

So, that's a no go. What it gets right (in addition to how it feels to be on a roller-coaster) is the notion that in the emotional build-up is a build-up of potential energy. Going through the necessary negative emotions helps us to be ready for what comes next. We wouldn't be sent careening down the thrilling part of the coaster without the build-up of potential energy that occurs.

Similarly, people who can work their way through the change and the associated negative emotions are really positioned to truly accept the change, embrace it, and become champions once they reach the right-hand side.

The processing of negative emotions are what sets that positive trend in motion in a real way.

So what visual does capture this? The best visual I've been able to come up with is the idea of the slingshot. In the slingshot, potential energy is captured as the sling is drawn back - nicely matching the work required (as both a leader and individual) in order to actually pass (constructively) through the negative side.

Then, with the potential energy of the work captured, you can release the slingshot and actually draw all the momentum you need on the positive side.

I could not come up with a way to capture this in a single drawing, but I think a two part drawing does the trick: 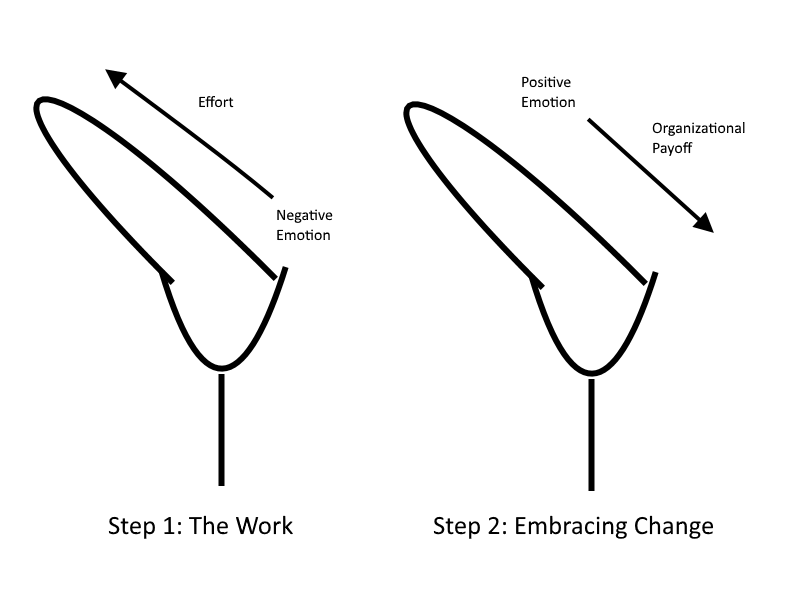 My apologies to the artists in the room.

This is really a leadership view of this path through change. I think the original roller-coaster is probably best and sufficient for everyone else in an organization.

In searching for images on potential energy, I came across this image: 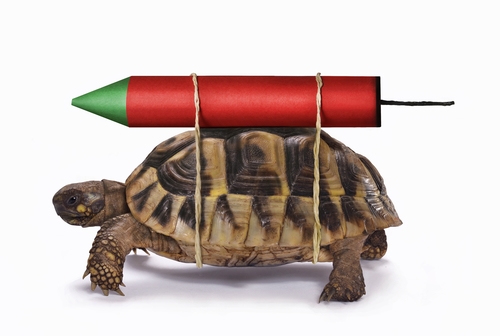 This turtle is about to undergo a change (and probably highly negative emotions).

But that doesn't have much to do with organizational change. I'm not sure it has a lot to do with potential energy either - at least the turtle part.