Sometimes (not all the time) the mousetrap you already know is the better mousetrap.

I am, at least for this post, talking about actual mousetraps.

I've recently had some run-ins with mice and after trying a couple of newfangled mousetraps I've gone back to the simple, board-and-wire, you-know-it-from-cartoons type mousetrap. 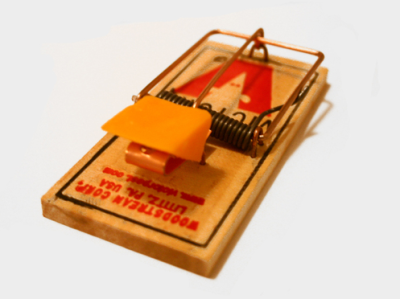 The main feature of the new mouse traps seems to be (and you're paying for it): the privilege to not see the mouse you've just killed.

The old board/wire traps kill mice really well and sometimes they kill mice who weren't even looking for food - put them in the right place and it will kill mice.

The newfangled ones require mice to go into the trap, which they can simply decide not to do.

Also, a lot of the new ones are 'use once' traps. You know what else is use once? Something that costs 50 cents.

But, like I said, you have to see a dead mouse.

Just to prove I'm not a total Luddite I did buy some ultrasound blasters that you plug into a wall socket to keep rodents away. I'm waiting to put those up until I see more dead mice though.

Some how, just scaring them off with the ultrasound doesn't prove to me their gone.